My father, Hector Jourdain, was a complex man. He grew up in challenging circumstances, the full extent of which I will never know. He was the youngest of six children of entrepreneurial and demanding parents. He grew up in Cap Chat on the Gaspe coast in the 1930s and 40s. He worked hard but never quite felt like he measured up to the expectations laid out for him. It shaped him, like we are all shaped by our upbringing.

For people who knew my dad, they know he was not always the easiest person to get along with. He was very particular, which is likely why he was known as Hector the Corrector as I wrote in my last post about him.

He lacked some social sensitivity, particularly for today’s age. He didn’t always listen well. Perhaps because he couldn’t hear well. Perhaps because his mind was going a mile a minute all the time. He was known to express his frustration to friends he hadn’t seen in awhile, “You drive right past my house but you don’t stop in to see me.”

Dad and my brother Robert in Perce, Quebec

And, he had a quirky sense of humour and an impish grin. He could as easily light up a room as darken it. He drew people to him in unexpected ways. New neighbours, others he met along the way, who became good friends, some of whom saw the charming side of him and some of whom learned how to put up with the ornery side and show up for him anyway. And many people could see the multi-dimensionality of who he was. 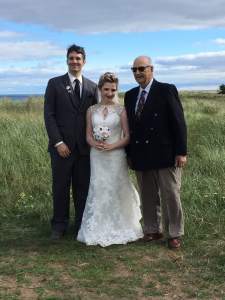 He had trouble understanding the fluctuating nature of friendship or what we might now refer to as the “reason, season, lifetime” that explains why someone is in your life. He wanted all his friends to be lifetime. He wanted the camaraderie of the Bluefin days to exist in perpetuity. That people’s lives changed and families expanded from children to grandchildren and different interests, even as his own did, challenged him and his memories. My brother Robert reminded me the other day that when and where my dad grew up, people lived in the same houses for lifetimes and families lived within walking distance of each other much of the time.

Our memories are fuelled by the stories we tell of our past and our experiences. My father loved my mother. A love that was enduring up until the day he died. There was never anyone else for my father, not even the entertainment of the idea of someone else, even though he outlived mom by 8 years – 12 if you count when she went to live at Harbourview Haven.

I didn’t always see or understand that love because not all the days of their marriage were calm – to put it mildly. So, in his latter years when he described my mother as his best friend, saying they never went to bed angry any night during their marriage, I only raised my eyebrows but never commented. It is not quite how I remember things. But, he was entitled to the stories that were true for him. Especially because it was his love for my mother that guided his care for her as she was overtaken by dementia. He went above and beyond for years. Even after she went into long-term care, he visited almost every day and, with my brother and me, was there with her when she passed in 2012.

Dad defied medical odds. He tiptoed up to the edge of death on many occasions, looked over and said, “No, not yet.” Doctors would look for the medical reasons why my dad recovered – from being in a wheelchair because he had no strength in his legs to walking again, from being diagnosed with chronic lung disease to having his home oxygen removed because his lungs improved to other inexplicable recoveries. There were no medical reasons. There was a strong will to live.

One such time of defying medical odds was during his second open-heart surgery in 2006. His first open-heart surgery was in the 1970s. This time, he was on the wait list for the surgery – waiting for the call. Instead, I got the call in the middle of the night that he was in the hospital. He had driven himself to emergency with my mother who later drove the car home – which was all she could talk about since getting out of the parking lot was perplexing to her. Dad was being sent to Halifax via ambulance. I had to drive to Lunenburg to pick up my mother. Driving down the 103 at dawn, as I got near to Mahone Bay, there is a stretch of road where you can see a long distance ahead. There came the ambulance as the sun was rising, lights flashing. Driving past that ambulance, knowing my father was in it and I was going in the opposite direction, was one of the most surreal moments of my life.

Dad was exhausted because his heart was in bad shape, because he had been taking care of my mother and who knows why else. He was afraid they would send him home too soon. He fixed that. He didn’t wake up from the surgery for 10 days. When he did wake up he was, naturally, disoriented. It took him a long time to understand how many days he had been out. He chastised me for keeping him on life support when I knew his wishes. I told him, there was never any question about his recovery.

Years later, he shared a story with me. He said, during that time when he was not fully conscious, he went “up above”. He was in a corridor with a lot of doors. He was knocking on the doors and trying to open them but was not successful. Finally, one of the doors opened. It was Arch-Angel Michael and he said to dad, “It is not your time, you need to go back.” My dad believed he had not yet atoned for his sins. He told me he knew what it was he needed to do. Apparently he has either completed that mission or come to terms with it.

Dad had confided that story in someone who told him that it could not be true because “once you go there you do not come back.” It took him years to share the story with me. “Do you think I’m crazy?” he asked me. I told him, “You’ve read my memoir – several times. Of course I don’t think you are crazy.”

I made my peace with my father a long time ago, as part of my own journey. I was his patient advocate and his chauffeur. I will miss our jaunts to Busy Bee, Princess Auto and other spots where he would pick up tools and other supplies. I won’t miss the numerous doctors’ appointments so much. I will miss our lunches – just the two of us usually but sometimes with a guest or two – my children or my friends. His favourite joke to the wait staff was, “She’s not my girlfriend. She’s my daughter.” I will miss our trips to Quebec of which we were fortunate to have a few in the last few years. We had plans to go again this summer. Life is quiet without him in it.