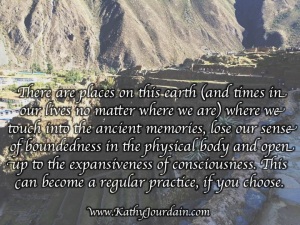 What are you waiting for?

From a very young age, I have always believed in the super-natural – things “attributed to some force beyond scientific understanding or the laws of nature” or beyond our own limited “understanding” as human beings – limits, by the way, we have placed on ourselves.

When I was growing up and even as a young adult, I used to think it was something only very special or very gifted people could access and I was in awe of them. Now I think of it as “expanded consciousness” and I know that every single one of us has the capacity and ability to access it. Not just in special places or special states of being, but anywhere and everywhere, when we choose to. But we doubt ourselves and our experiences. We invalidate our experiences, saying “it wasn’t real, it was my imagination, I’m making it up.” It is part of the stranger within that goes unacknowledged, un-embraced. For many of us, this was what we heard growing up. Our connection to expanded consciousness, to source, was “beaten” out of us and replaced with the kinds of messages we now hear in our own minds when we encounter our own expansiveness.

We learned how to fit in with our families, friends and institutions (school, church) – our Worldview influences. Yet, for some of us, there was a niggling sense that something was missing, not explained or not quite aligned. Questions you couldn’t ask, observations you couldn’t make, and the door to expanded consciousness slowly – or abruptly – slammed shut.

This niggling sense does not go away though. Maybe it is just easier at first to imagine that only really gifted people have access to expanded consciousness. That way we can live vicariously through someone else’s experience rather than venture into a place we have been told doesn’t exist, that we have learned to shut off for ourselves.

My first encounter with spirit guides was when someone else told me about one of mine. When I was told I could develop my own “intuitive” capacity, I couldn’t. I got nothing. No information. No connection. No visions. And I certainly didn’t trust any information that might have come, certain I was making it up – with that certainty shutting down access to information.

Slowly, slowly, over years, I began to learn to trust my own experience, my own “visions”. There were periods of awakening, periods of “practice” of being in touch with my own expanded consciousness – which meant periods of regular connection to non-physical entities like spirit guides (mine and others) and there were/are greater periods of non-practice equivalent to shutting down connection, access to information and flow.

Yet, it is so simple. It is a matter, for me, of shifting awareness, asking the question, opening to my heart and my knowing, inviting the experience and the connection. So very simple.

My youngest son and I making drums in 2009 – part of the compelling journey.