I have been “asleep” for over a year – since I dislocated a toe and stopped running. Running used to call me out of the house into the great outdoors. And it prompted other exercise as well. For over a year, I have not run, I have exercised intermittently, been a couch potato, eaten far more chips than is good for me and been self critical of my bad patterns. While I have held the intention to get more active again, with a travel schedule that makes routines difficult, it was easy to become a slouch.

Then there comes the moment when intention becomes reality and everything shifts. Even subtle shifts bring change. This September has marked that shift for me. I find myself being called outdoors again, even, or especially, in the middle of the day when the sun is shining. Not to run, but to walk. I know walking is good for me but until now it didn’t have the same pull as running used to. Then a friend suggested Nordic Walking with poles and my game shifted into a higher gear.

The thing about walking with poles is that it changes your posture and gait. I call it power walking. The first time I used the poles, I was not in sync. My legs went twice as fast as before and my arms were moving at half the pace of my legs. I didn’t care. At least I was moving faster with seemingly little effort. The second time I went walking with the poles, it all came into sync. It was that quick. My posture is better, I hold my head high, my gaze straight ahead as I focus on synchronizing the rhythm of arms and legs. My gait is different and, again, it feels effortless to walk for almost an hour at a good pace. And the physicality brings more mindfulness and the more mindfulness brings more insight.

Regaining a better level of fitness, being outside, brings me joy. Pure and simple. And the walking reminds me of how simple it can be to repattern old habits into new ones. Other exercise is now easier to do, I feel better, I can already feel the changes in my body and I am becoming more focused which benefits my work. My energetic vibration is on a higher frequency and this means more of what I want is manifesting in my life.

It is also a reminder to be compassionate with self when in a pattern and rhythm you don’t like or that doesn’t seem to serve. The contrast alone is a helpful thing and holding the intention long enough gives it its own life force and it will eventually manifest. It cannot help but. 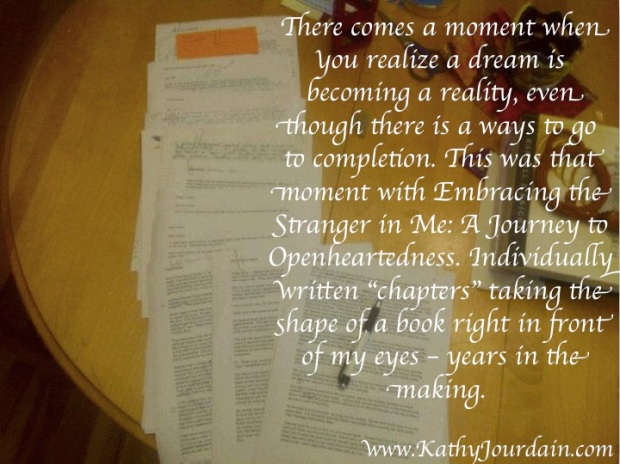