At 6’4″, with a direct, no nonsense approach, Rob van Soest did not suffer fools lightly. Which made him a surprising mix of intimidating, daunting, trustworthy and likeable. You knew where you stood with him. He was clear about his values and lived them. With an often gruff exterior, he was a a kind, caring and loving man who stood by what he knew were the right things to do and the people he cared about, especially his wife, Deb van Soest. The evening of January 15, 2015, he left a big hole in the hearts, minds and souls of so many as he transitioned back into spirit to continue his own soul journey, supporting, cherishing, loving from a different dimension. He was just 65 years old.

I first met Rob in March 2008 when I went to his home in St. Paul, Alberta to meet his wife, Deb – my sister –  in person for the first time since we were children.  I was arriving as he was leaving – on his way to work on a post-retirement contract in Fort McMurray where he and Deb had each lived for about thirty years. They worked for the same company which is how they met and they retired together to spend time at their home in St. Paul, to travel together and to spend time with family and friends who mattered.

Since retiring, Rob was in demand for contract work. Employers trusted him, knew his sense of integrity and knew he would get the job done well. Rob enjoyed the contract work because he was beholden to no one, could speak his mind openly and clearly and take or leave the work depending on the circumstances. If he thought it would compromise his integrity, he would not commit to do the work. He and Deb had many and deep conversations about the path he and they wanted to walk.

He was, of course, curious about me and how it would be for Deb to meet me and be with me for a few days and discreet enough to give time and space to the new – renewed – discovery of relationship. By the way Deb talked about him and their relationship and some of their many stories of family over the years – between them they have ten kids – it was clear they had a solid, loving, respectful, mutual relationship.

When I met them, Rob and Deb were living on their property in St. Paul – remote, woods and fields where the dogs could run and they could go 4 wheeling or snow-mobiling by themselves or with visitors, like kids or grandkids, friends or like me and my son Shasta when we visited – which we did together twice. Rob had rules for the operation of 4 wheelers and snow mobiles, for fires, for guns. His rules were for safety. The kids and grandkids obeyed the rules. As long as they did, it was all great. If they broke the rules, there were consequences and not a single person doubted that would be the case. He commanded respect and received it because he gave it. 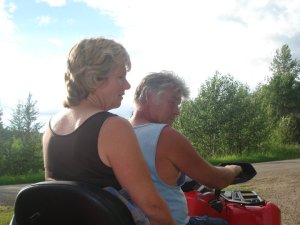 Roaming the property – with Shasta and me and their two dogs. First time Shasta went 4 wheeling was under Rob’s guidance.

Shasta and I first visited there in 2010. He was eight years old. With a three hour time difference, I was a bit concerned about him waking too early and waking the household – not wanting him – or me – to get on Rob’s bad side. I was surprised in the morning when I woke up and Shasta was being very, very quiet. I commented on how quiet he was being. That’s when he told me that if he wasn’t quiet, Rob had threatened to throw him in the beaver pond. I looked at him quizzically and said, “Rob wouldn’t do that.” What I didn’t realize was that Rob’s grandson who was also visiting at the time and was in his teens, corroborated Rob’s threat. He looked at Shasta in all seriousness and said, “That’s where my brothers are.” I could tell that Shasta was trying to reconcile in his eight year old brain his sense of Rob and Rob’s integrity with this threat and clearly Rob was not beyond pulling a good prank on someone.

On their deck – a regular occurrence – with one of their dogs – overlooks a beautiful back yard, the fire pit and the beaver pond.

I also remember standing on the deck with Rob, watching Shasta occupy himself by running from the fire pit down by the beaver pond up behind the house to get a piece of wood and run it back to the fire pit when Rob would just as easily have brought the wagon up behind a four wheeler to load it up and take it down. Rob and I both shrugged as we watched him do a little dance every time he headed back up.

I am grateful that Shasta and I (and my other two boys as well) have memories of this extraordinary man and I mourn the fact that I did not have more time to know and experience him and that my life partner and Rob did not have a chance to meet. They would have liked each other. And then I know there are others who had the privilege to know him and journey with him for much longer and who will miss him deeply. 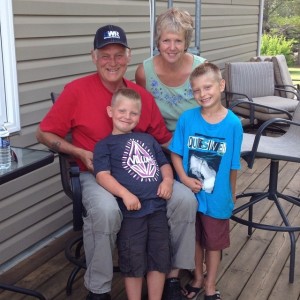 Rob and Deb with two of the grandchildren – mutual adoration.

The quality of Rob and Deb’s relationship – of strong communication, openness, mutual support – is a quality I now experience with my own partner who I did not know at the time Deb and I first met. While the four of us won’t have the opportunity to meet, raise a glass together or spend time together, their relationship is an inspiration and an aspiration for me. Love them both. Might even raise a glass of good Alberta Whiskey in honour of a man who blazed a true path.